The Hoot of the Owl

Blessings to Open unto the Unconscious

The Owl Kingdom through Lilliya
September 7, 2001 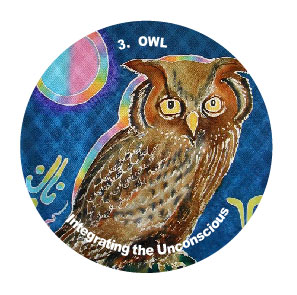 The Owl Kingdom has been invited to speak our truth to those in human form willing to listen. Owl has long been associated with seeing into the dark, or in other terms "night vision". Indeed, our species sees very well in the dark, and hunts primarily at night to sustain our physical form. Such gifts are also so in the nonphysical realms as well.

Owl is often the kingdom that Earth calls upon to sort through her unconscious. Owl is gifted at seeing the details related to karma, unconscious thought-patterns, where missing knowledge strayed to, the agreements that were made in unconscious bargains, and the manipulations to Earth's global field and form. Often we are called upon when Earth is seeking to release a specific karmic circumstance and she herself is having difficulty finding all of the original cause. In such moments, we put our focus and intent towards uncovering the past along with reading the unconscious and assist Earth to the best of our abilities.

For human form, those who are ascending must become familiar with the unconscious. It is human nature to reject the unconscious, project it upon another, or try to sweep it under the carpet so to speak. Although this may have worked up until this time in history, such avoidance of the unconscious shall no longer work in the human dance. Why? Earth is integrating her unconscious and this brings the unconscious to consciousness for all species therein. Most species are integrating their own related unconscious at a pace that serves Earth's overall vibration. The only species not striving en mass to also integrate the unconscious is the human species.

Humanity has fallen so low in consciousness that they no longer retain awareness of the nonphysical realms. Those ascending in human form will therefore have to open unto their unconscious and begin to relate to the nonphysical realities that surround oneself. Only in seeing the unconscious may one then release the ancestral karma that has come to roost so that it does not manifest in the physical.

Many in human form may find themselves in great travesties in the years ahead. Such travesties are the unconscious patterns becoming physical. If such humans choose to ascend and release the patterns through conscious intent, the travesty can be avoided. So it is for humanity, so it is for Earth. It is for this reason that Earth is addressing Warfare Karma in this year of 2001, to avoid a nuclear war in the year ahead by releasing her global karma now. There shall be other travesties avoided upon a global scale in the years ahead through siLilliyar precautions taken upon the part of Earth and upon the part of all species therein. So it is for Earth, so it is for human form.

And so what does Owl wish to say to our human brothers and sisters? Look within. God Goddess lies within, and through your heart, you will hear your truth, path, direction and journey with great clarity. It has been human nature to look outward to understand your destiny, or what spirituality is, reaching to gurus or teachers as though such humans knew more than yourself. No one knows more than you about your path beloved; and so we guide you to tune inward and give up the predisposition of believing that your truth is without. We also guide you to open the heart, for it is only as the heart opens that the soul residing therein can be heard enough to direct one's spiritual unfolding.

The unconscious is an inward experience. The unconscious holds positive and negative nonphysical realities. The negative realities are often filled with pieces of self that fractured off in loneliness, anger, fear, pain, or heartache. As each negative part of self is retrieved, the unconscious reality associated is integrated, and one gradually transcends pain, anger and fear as the foundation of vibrations that one sits within. As each part of self is integrated, one becomes more whole from within, which is a joyous experience beloved.

Human form is a creator, a creator of one's own destiny. The further that one ascends, the greater ease one will have manifesting one's dreams and desires, as this is the outcome of recovering one's power as a creator through ascension. Each may find their lost dreams within the unconscious as they begin to open the gate unto such and integrate it in ascension. If one is going to ascend into something, where is one going to go? One must envision their future, and one may use the dreams and desires held latent in the unconscious as keys to where one will go as they ascend. Ascension is about finding one's joy, and all that would fulfill oneself and allow one to be in the joy is therefore where one moves to, the further one ascends. This equates to dreams made manifest and experienced for the pleasure of it!

Owl has two gifts for our human audience today. One is the ability to traverse into one's own unconscious without fear. Call upon Owl, and we will be your guide. In neutral, you may assess the lost parts of self and lost dreams without judgment. Then you may focus upon the related karma of your ancestry in calling upon Eagle. In so doing, all parts of self, past and present, can be assessed, the karma released, and the fractured soul reunited into a greater state of wholeness within.

The second gift is our ability to sort through one's unconscious thought-patterns, beliefs, and agreements so that they are understood and then can be released. Only as the beliefs are released does one uncover their truth. We can assist in pinpointing the belief so that one may so choose to release and transcend it, past and present, and move into a newfound foundation based upon one's living truth.

Beliefs are a dead truth. Beliefs are founded upon pain, suffering, death, judgment, greed, fear, and lust. Living truth is founded upon forgiveness, non-conditional love, freedom and joy. As the beliefs are released, each is replaced by truth, one layer at a time, in the choice to ascend. As living truth becomes one's foundation, one learns to exist in peace and joy.

The process by which peace and joy become one's foundation is not a short process nor is it a short journey. Each human will ascend for over a decade's time or longer to bring forth the new foundation of joy. Just as humans are moving towards joy, so is Earth. It is our hope along with Earth that more humans join the dance of joy possible in the years ahead through the choice to ascend.

We hope you have found this information useful.
Namaste
The Owl Kingdom

Back to Nature Kingdoms | Back to Main Articles Section